As the United States added 263,000 jobs in November, Canada stood by and watched in awe. The change in total employment north of the border in the latest month, according to Statistics Canada, was only +10,000 jobs.

On a little cheerier note for Canada, full-time employment in November rose by +51,000 jobs, although part-time staffing fell by -41,000. Full-time work is higher paying and more stable and is therefore judged to be of higher quality when it comes to helping out the economy.

Canada’s headline, and seasonally adjusted, unemployment rate is now 5.1%, down slightly from October’s 5.2%. The nation’s U rate not seasonally adjusted (NSA) is 4.6%. The NSA U rate, calculated according to the same stringent standards as in the United States, with respect to who is really truly trying their hardest to find work, is 3.8%. The 3.8% figure is not far off the 3.4% number south of the border.

November wasn’t a good month for hiring in the construction sector, however. The jobs loss in construction in the latest month, -25,000, exactly matched the gain in the prior month, +25,000.

The overall decline in construction employment in November occurred mainly in Alberta (-13,000 jobs) and British Columbia (-9,200).

It shouldn’t come as much of a surprise that construction employment is flattening. In a separate report on the cost of construction, Statistics Canada is laying out some truly stunning increases, which must be causing some owners to waiver when considering their capital spending plans.

Toronto, which carries a weighting of about one-third in both indices, recorded the most eye-popping advances, +25.9% y/y for residential and +15.6% for nonresidential.

Returning to the overall Canadian labor market scene, Quebec now has the lowest unemployment rate among all the provinces, just 3.8%.

Alberta still has an elevated unemployment rate, 5.8%, but it’s creating jobs at nearly twice the clip of the country as a whole, +3.6% y/y versus +1.9%. The next closest province for hardiest year-over-year jobs growth is Nova Scotia, +2.9%.

All the provinces in Atlantic Canada have been creating jobs y/y at a pace speedier than the country as whole. Historically, this has not been a common occurrence. The Atlantic has usually ridden further back in the pack when it comes to employment generation. In fact, that’s why so many young adults from the region headed west in years gone by to earn good paychecks working on resource projects in mining and energy extraction.

Consequently, maintaining population levels in the Maritimes and Newfoundland and Labrador has often been a challenge. But that appears to be changing. The experience of the last two-and-a-half years has shown that, with the Internet, it’s possible for diligent and creative people to produce quality output from home, wherever that may be. So why not consider a change in scenery?

Beyond the 9-to-5 routine, the lifestyle offered in the picturesque provinces of the Atlantic competes favorably with almost anywhere. Plus, the cost of housing is still relatively inexpensive compared with Canada’s largest population centers.

There are a couple of other passages in Statistics Canada’s November labor market report that are quite interesting. According to latest survey results, the proportion of the total Canadian workforce that currently works either partly or fully from home has risen to one-quarter. The share with a hybrid arrangement is 15.6% and the share that is exclusively home-based is 9.4%.

And finally, as another indication of the change that has overtaken the labor market, the increase in employment with non-store retailers (i.e., companies with internet platforms that promote mainly online purchases) has increased by an impressive one-third since spring 2020 at the outset of the COVID pandemic. 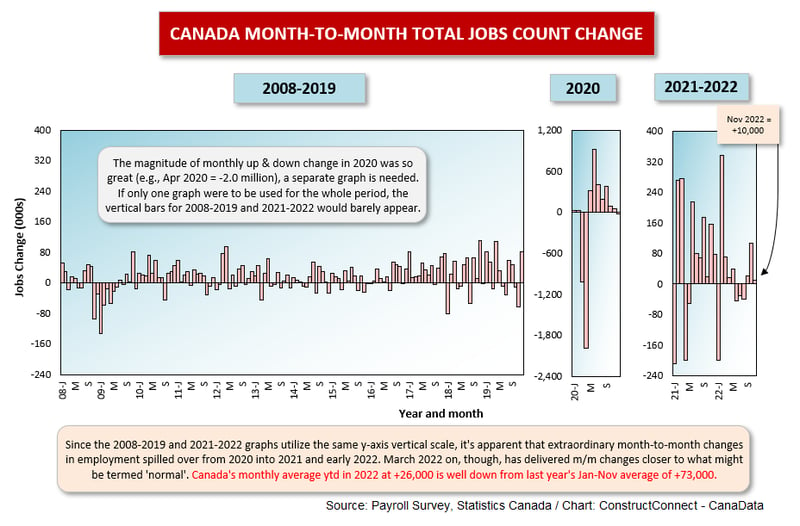 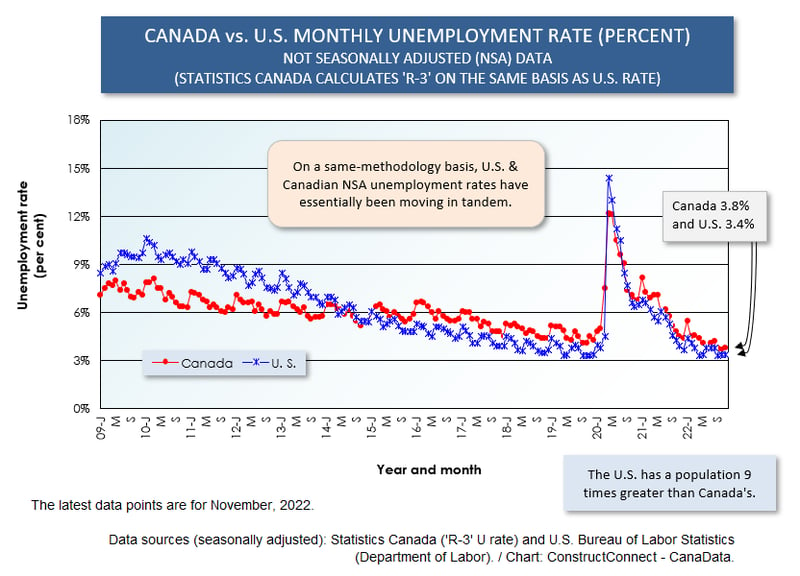 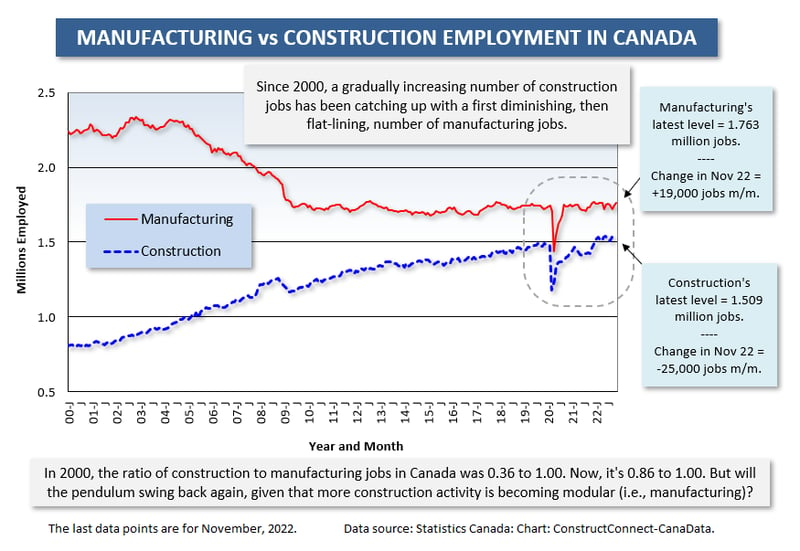 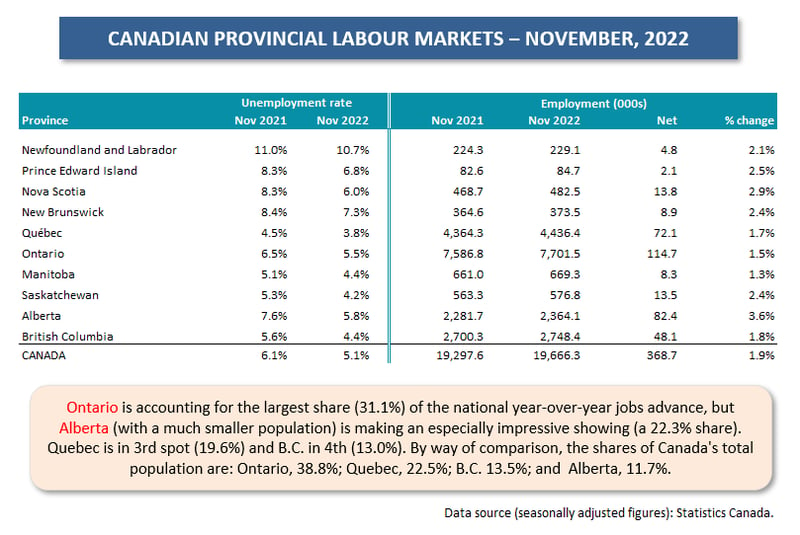 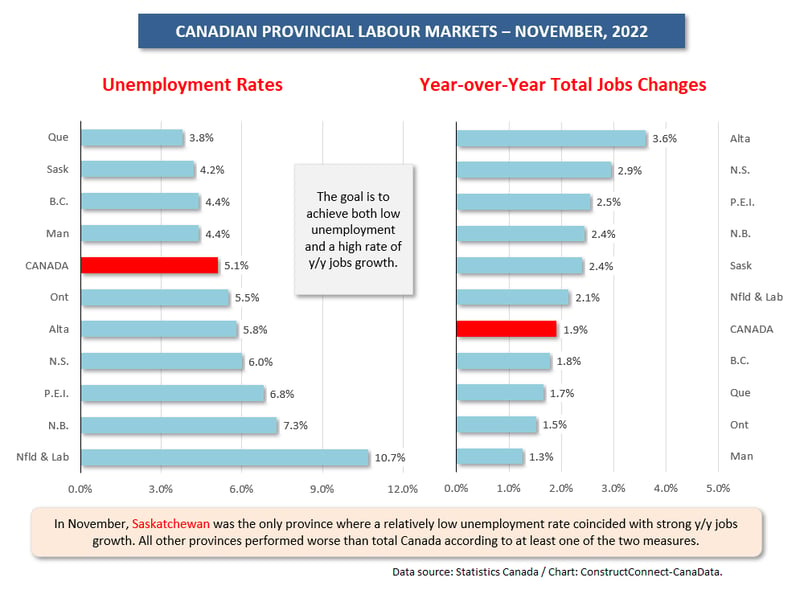 Designed and Developed by : OpenSource Technologies